by the Cape Historical Society

Cape Vincent residents take great pride in the historic background of this area and in the heritage of their ancestors.

Earliest history of this area dates back to the years of the first Indian settlements in New York State. Traces have been found of an Iroquois prehistoric village, and it has been shown also that the Onondaga Indians claimed this portion of New York State as their hunting grounds.

The first record of the white man’s visit to this immediate vicinity was in 1615, five years prior to the memorable landing of the Pilgrims. Samuel de Champlain and his compatriots on their expedition to the Iroquois country reached Lake Ontario near Kingston, Ontario, Canada, thus bringing the expedition within the water limit of our town.

Early in 1655, French Missionary priests, Father Chaumonoit and Father Dablon were here as missionaries among the Onondaga Indians. History shows that both England and France were endeavoring to monopolize the Indian trade and to extend their influence with the native tribes. The French established a fort at Niagara and the English established a fort at Oswego. Both the French and English built trading posts, established missions and built homes in this area.

Among the large land holders in the North Country was James LeRay Chaumont, who came to America in the late 1700’s His holdings covered a large part of this area and included much of what is now the town of Cape Vincent.

In March 1815, and act was passed by the Legislature stating that the Islands of Carleton and Linda in the St. Lawrence River, and Grenadier, Fox and neighboring islands in Lake Ontario were a part of Cape Vincent. The village of Cape Vincent was incorporated in June 1853 with a population of 1,218. The village water system was installed in 1895, and electric lights in 1903. The Town of Cape Vincent separated from the Town of Lyme in 1849.

As early as 1880, the “Thousand Islands” were being written about in a book published in Canada. Shortly after, Cape Vincent was becoming a popular vacation resort for down-state residents. At this time, it was recorded that: “In Cape Vincent may be found the best small mouth bass fishing among the Thousand Islands–here the surroundings are picturesque, the climate is mild and healthful.

Cape Vincent developed rapidly during the era of the early 1800’s when the state road was extended from Brownville to this village. In 1848 sufficient stock was subscribed to warrant building a railroad from Rome to Cape Vincent, at a cost of $7,500 per mile. Then a large train shed, hotel, freight houses and wharf were built. In 1853, a canal was cut through Wolfe Island to shorten the route from here to Kingston, closed for a while but now to be reopened. The railroad was the main means of transportation to and from this village for many years.

During the War of 1812, declaration of war made it necessary to have armed forces at Cape Vincent, and there was no army post on the frontier in as much danger as Cape Vincent, since the enemy had a large force in Kingston, Ontario, Canada. At this time many inhabitants left for back settlements, but when the danger was over, many returned and the number of settlers steadily increased.

Early industries were lumbering, ice harvesting, hay and seed raising. The J.A. Scobell Company and the Cleveland Seed Company were two such businesses.

As you travel through Cape Vincent today your first impression is probably of the serenity of the village, or the friendliness of its inhabitants, or the beauty of the St. Lawrence River. Those of us who make our home here in the Cape Vincent area are very proud of all of these factors, but we would like to point out a few of our landmarks and other outstanding “bits of interest” for this vicinity.

At the end of Tibbetts Point Road leading west, where the great Lake Ontario meets the St. Lawrence River stands the Tibbetts Point Lighthouse. This lighthouse was erected in 1826 by an appropriation of $3,000. Today it still guides ships traveling the St. Lawrence Seaway into the Great Lakes. The light is automated and under the control of the U. S. Coast Guard. The main dwelling is now used for a Hosteling International. The land used was a grant received by Captain John Tibbet of Troy.

Proceeding down the Tibbetts Road is a beautiful sight, especially at sunset time. Lake Ontario was known in the Indian language as “Beautiful Lake” from the days of Cartier.

As you enter the village coming down from Tibbetts Point, you will pass the famous “Stone House” which housed Canadian Rebels during the Patriot War in 1838. This house has not been changed in any way.

Up on Kanady Street stands the stone Catholic Church, St. Vincent of Paul’s, which was built in 1851. The attached stone covered church hall was added in 1965.

On Real Street, toward the river, is the  Cape Vincent Community Library which opened in June 1968. On the land where the library is located was built the original Cup and Saucer house constructed in 1818 as a refuge for Napoleon. Although the original structure was destroyed by fire in 1867, the foundation of the original building is a part of the library building. Mr. and Mrs. Robert Purcell of New York City and Deerlick Farm, near this village, equipped and furnished this attractive and modern library for the people of this area.

The first of three Cape Vincent Newspapers, the Gazette, was published in 1852. The Cape Vincent Eagle was published from 1872-1951, when the final edition was printed. The building that housed the newspaper is presently owned by James Brown and is next to the fire hall.

On Broadway stands the  fire hall built in 1967 by subscriptions of interested citizens. This building replaced an old wooden structure which served the needs of the volunteer fire department for eighty-three years. The Fire Department celebrated their centennial on June 23, 1984, with an open house and dance.

Across from the Fire Hall is the John C. Londraville American Legion Post  832 which was formed in 1919. Down one block toward the river is the Memorial Park with plaques in memory of Cape Vincent War veterans. Ceremonies take place at Memorial Park on Memorial Day and Veteran’s Day.

The United Church on Broadway, formerly the Presbyterian Church, was erected in 1823. The chimes that are heard three times daily from the United Church were donated by a summer resident in memory of his wife. Many recordings in memory of people of all faiths are now being played.

The original  St. John’s Episcopal Church built in 1841, was destroyed by fire in 1999. A new church was erected and was dedicated in 2001. The church is located on Market Street.

The Post Office on Broadway opened its new building on April 2, 1962. Since 1817 there have been twenty-four postmasters.

The New York State DEC Fisheries  Research Station and Aquarium, formerly a Bureau of Fisheries building, was erected in 1856. Built to be used as a grist mill, it was purchased in 1895 by the Federal government for a Fisheries Bureau. As a Federal Fish Hatchery it is noted that in 1906, 38,780,000 eggs from various kinds of fish were hatched and distributed to different points.  This building is open to the public today for your inspection, displaying many kinds of fish. The marine research vessle, Seth Green is docked here.

The Cape Vincent Seaway Pilots office and dock are located on North Point Street. From here the Lake and River pilots are transported to their assigned ships as they travel from the lake into the river or from the river into the lake. This operates twenty-four hours a day from March until December during the lake and river navigation season. To see when the ships may be passing through log onto www.greatlakes-seaway.com

Throughout the area are many old homes built of limestone which was available in the region. These attractive homes were built of a low-sprawling design, many in the Wilson’s Bay area, and have been kept in their original form.

On South James Street in the village is a house which was built in 1872, by General Delos Sacket who entertained Civil War Generals and is considered one of the most historic homes in the village.

History shows that one of the first schools of learning in this area was erected on Carleton Island in 1823. From then on many one room school houses were built throughout the area, when in 1906 the records show that there were seventeen school districts in the the town of Cape Vincent. The present school building, on Esselstyne Street, now an elementary building, was constructed in 1942 when all the districts centralized. This brought an end to the one room school house. In 1967, voters in Cape Vincent and Clayton (15 miles to the north) voted to consolidate their two districts in order to provide facilities to increase educational opportunities to all local youth. In September of 1972, the new “Thousand Islands High School” opened on its site at Sand Bay, half way between Cape Vincent and Clayton.

In 1968, local residents inaugurated a FRENCH FESTIVAL DAY. This day has become an annual affair and is held on the second Saturday in July near Bastille Day. French Festival Day has grown each year since 1968, bringing thousands of visitors to Cape Vincent for the celebration which consists of many French booths, exhibits, costumes, French pastries, parade, band concerts and climaxed with a gigantic fireworks display in the evening. The LeRay family owned and settled much of the land in this area, with most of the early deeds of the 1700’s bearing the signature of Vincent LeRay. Familiar names then, as now, are Gosier, Docteur, Dezengremel, Mussot, Chavoustie, Favrey (Favret), Merchant and Majo. The main program on French Festival Day features many New York State dignitaries and specially invited guests. The program is held on Broadway.

The Community House located on S. Market Street was the first framed house built in the early 1800’s by the Borland family. In 1931 the Fish family donated it to the village for a Community building. In 1969 it was opened as the first Museum for the village. Since then the Cape Vincent Historical Museum has relocated to one of Cape Vincent’s oldest buildings.  The stone structure located on North James Street was used as a barracks to house soldiers during the War of 1812.  Later on the Forsythe Brothers manufactured ironwork for sailing vessels and cook stoves during its day as a foundry and machine shop. It has also served as a Town Barn. The Cape Vincent Chamber of Commerce has an office and a Tourist Information and Visitor’s Center in part of this historic stone building.

Although it appears that Cape Vincent is “just a quiet place to live” those of us who make our homes here find that our small town is the “center of activities.” We are located only 25 miles from the city of Watertown with a state of the art hospital, large shopping areas, Jefferson Vocational-Technical School, Jefferson Community College, and most of all the facilities of a large city. We are only a 45 minute drive to Fort Drum.

Locally, there are many organizations with active membership. These include Church Societies, Parent-Teacher Organization, Lion’s Club, Knights of Columbus, Study clubs, Firemen, Fire Dept.  Auxiliary, Ambulance and Emergency Squad, American Legion, and American Legion Auxiliary, Chamber of Commerce,  Senior Citizens, Improvement League, and numerous others. For those who belong to a number of these organizations, the winter months particularly are filled with various activities. Ice fishing, snowmobiling, skating, ice boating, cross country skiing are popular with Cape Vincent residents during the winter months also. 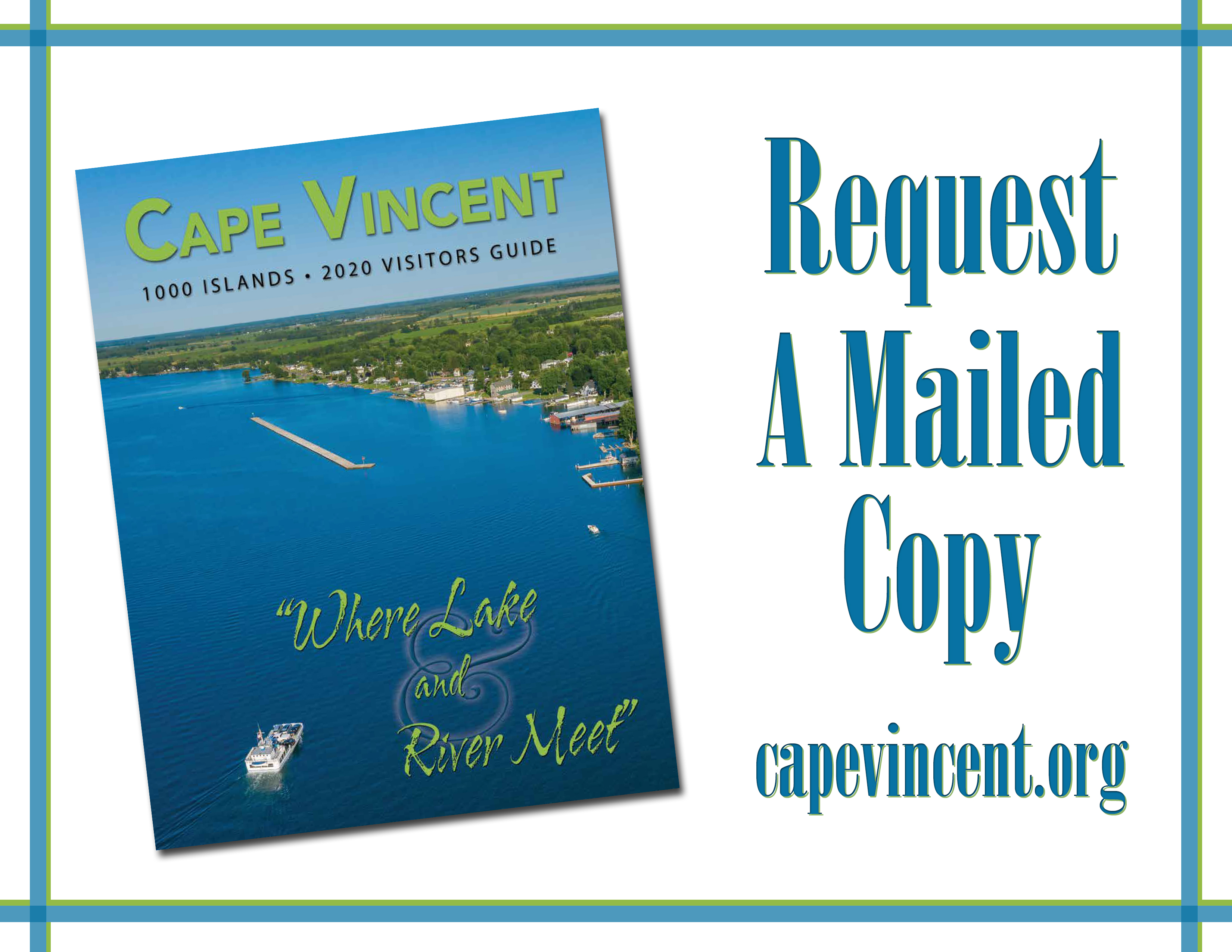 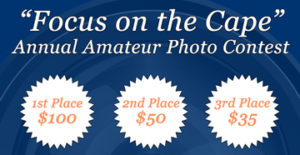 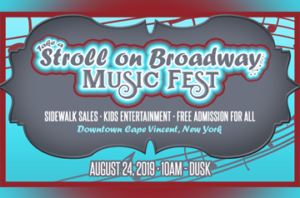 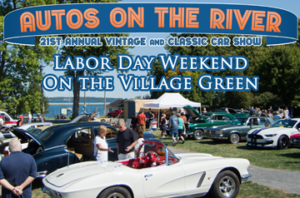 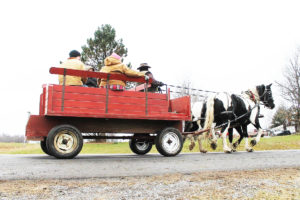 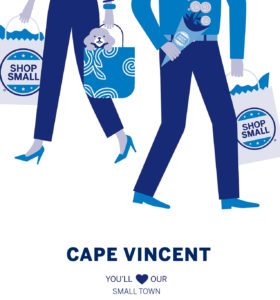